Campus do Mar is leading the initiative “Scientist Meet Artist” to meet and establish a dialogue between two different disciplines: Science and Art. The main goal is to design and create enjoyable dissemination material to make accessible the knowledge about the oceans to the public, specially children.

After creating a meeting point between twelve scientists and twelve illustrators who worked together to design twelve sheets of different styles and themes to make the oceans a meeting place. One year later, “Scientist Meet Artists” comes back and launches a new initiative called “Ocean Literacy“. This new edition comprises seven new illustrations dealing with each one of seven principles of  ocean literacy which were explained by seven scientists from Marine Research Centre (CIM) of University of Vigo and Spanish Institue of Oceanography of Coruña.

From Future Oceans Lab, our colleagues, Diego Salgueiro-Otero and Xochitl Elías Ilosvay worked together with the illustrator Ines Vázquez to create the sheet on 6th principle: “The ocean and humans are inextricably interconnected“. 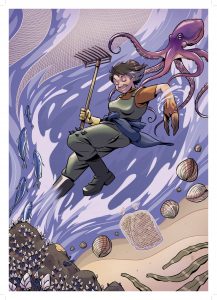 Both investigate climate change adaptation of artisanal fisheries as they are at the forefront of climate change since they directly manage the environmental goods and services and their resources. With this illustration, they  tried to make more visible how human and environmental dimension in artisanal fishing is indivisible called by researchers, socio-ecological system. The illustration presents a Galician shellfish gatherer linked with environment, this connection and harmony offer a key transformative power that can be the source of adaptation to climate change that we need.

You can find more information about this initiative, here