As previous years, The Marine Research Centre (CIM) of University of Vigo organized dissemination event within framework of Communicating Singular Science programme. This year, two dissemination sessions were scheduled. The first one, “Meet CIM in the street” a science conference  to general public hold in A Laxe shopping centre gathered researchers from CIM to present its scientific priorities and areas of specialization.  The second one, “Boarding with CIM” completes the scientific days organised by CIM and it consisted of a dissemination travel on board a classroom-boat and a guided visit of  Toralla Marine Science Station, CIM´s and UVigo´s main marine research infrastructure.

For “Meet CIM in the Street”, Ju 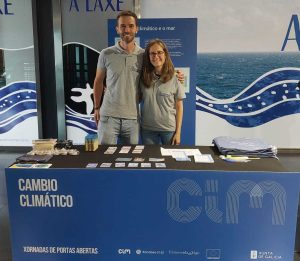 an Bueno and Julia Ameneiro, from Future Oceans Lab-CIM, explained the effects of climate change in the oceans and the dependent livelihoods, and how our research work focuses on adaptation solutions for marine systems to the impacts of climate change can reach future oceans sustainability.

For this day, our team designed a card game to introduce the general public, specially children, the concept of climate socio-ecological vulnerability. Knowing the vulnerability of the system allows design and implement specific actions of adaptation and mitigation to face climate chan 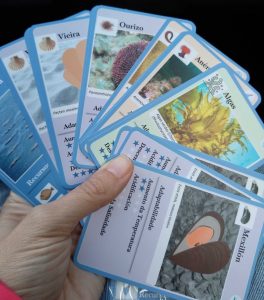 ge effects. In the game, participants as artisanal fishers have to assess what marine resource can be fished accordingly its adaptability to three hazard of climate change which were selected for the game such as temperature increase, acidification and decrease salinity, for each hazard each fisher have an adapative capacity given by adaptive capacity card taken from deck of these cards randomly. The objective of the game is get the maximum punctuation of adaptability .

People from broader public went to our stand and take interest in knowing in detail about our work on climate change. We enjoyed a lot and hope see you again the next year.

You can find more information in this link (Galician lenguage)