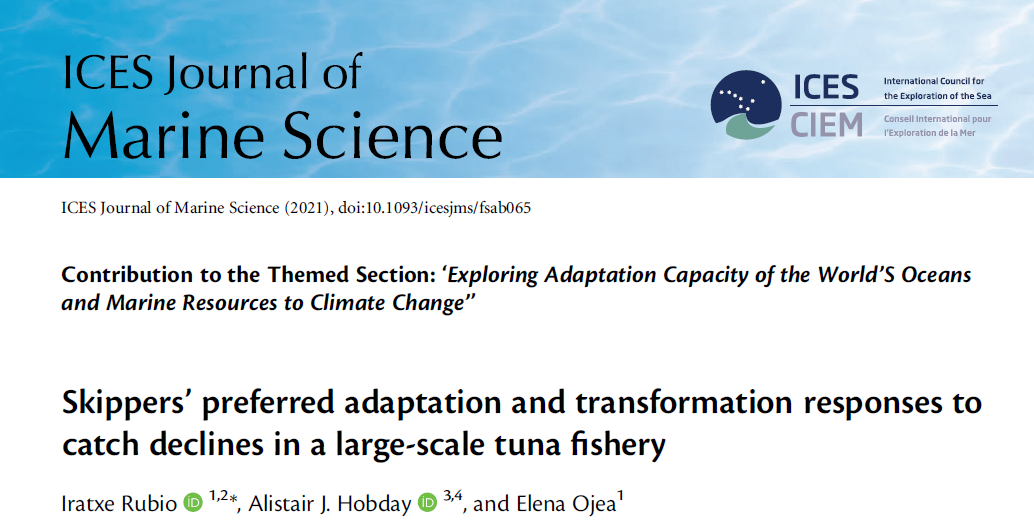 As part of her PhD, FOL member Iratxe leads a new publication within the CLOCK project
19/05/2021 -

A new FOL and BC3 study seeks to understand individual adaptation and transformation responses to catch declines in large-scale fisheries, using the case of the Spanish tropical tuna fishery. A sample of 22% of the Spanish freezer purse seine skippers operating in the Atlantic, Indian and Pacific Oceans was surveyed. In the last 10 years, more than half of skippers used new technology to search for tunas and expanded their fishing area as adaptation actions. The majority of skippers would follow adaptation strategies until a hypothetical 30% catch decrease. However, when facing larger declines, strategies diverge, and some skippers are whiling to keep adapting while others transform or exit the fishery. Skipper characteristics, such as importance given to intergenerational knowledge, perceptions of change in tropical tuna abundance, and years working in the current job, can explain the adaptation and transformation choices. These findings help understand the potential for adaptation behaviour by skippers involved in fisheries confronting catch declines.

This work was developed under the supervision of the FOL principal investigator Dr. Elena Ojea and thanks to a collaboration with Dr. Alistair J. Hobday from the CSIRO Oceans and Atmosphere and the Centre for Marine Socioecology (University of Tasmania). It was first published online on May 6, 2021 in the ICES Journal of Marine Science and titled “Skippers’ preferred adaptation and transformation responses to catch declines in a large-scale tuna”.

To read the original version of the article click here.