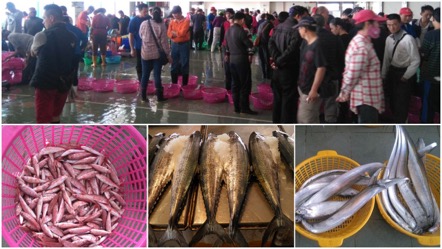 The new year visit to a Taiwanese fishing port

When it comes to rain, Vigo is not alone. Taipei, the capital of Taiwan, is another city known for its winter rain. Similar to the Spanish cuisine, seafood is deeply ingrained in Taiwanese food culture. During the 2018 new year break, FOL paid a visit to a Taiwanese fishing port, Ziguan (蚵子寮), about 300 kilometers south of Taipei. The visit is associated with an ongoing project that aims to study the targeting behavior of small-scale fishermen.

Ziguan is known for its well-developed auction market and fresh catches. The auction market is organized by the Ziguan Fisheries Association where local fishermen are the members. Only registered buyers can bid, but the registration is open to all. The market opens almost daily from 11am to 3pm, except a few days during the Chinese new year. Fishermen engage in daily fishing trips, they went out for fishing around 5am in the morning and returned to the port shortly before the market is open for auction.

The auction typically follows a Dutch auction style where the auctioneer starts with a high asking price and then lower the price till a buyer is found. During the peak hours, the atmosphere can be tense; e.g., FOL observed a fisherman who was angry that buyers were too conservative in giving bids; or when many buyers were interested in a catch that has only limited supply. Taiwanese consumers are willing to pay high price premium for freshness. It is common to observe Taiwanese housewives lining up for fresh catch in front of a fish vendor of their trust.

The coastal fisheries resources in Taiwan has been in deteriorating state in the last decades. Official statistics showed that Taiwanese increasingly sought after high seas to fulfill their annual catch.  In part, this is due to that coastal fisheries management primarily rely on license control. Climate change may also contribute to the situation. The impact is already felt by the migratory species such as Spanish mackerel (Scomberomorus commerson).