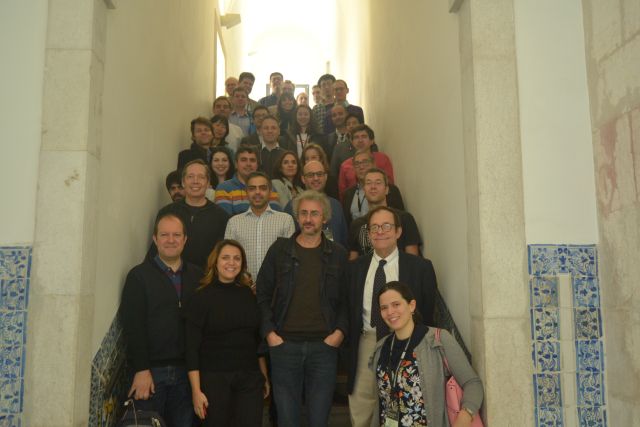 Reaching out to the Game Theory Community

"A good model in game [and economic ] theory is like a good fable, which is only loosely connected to reality but something significant remains."
15/11/2017 -

Lisbon, less than 500 km south of Vigo, appears to be a hot spot for game theorists. During November 9-11, 2017, FOL’s postdoctoral researcher, Xiaozi, attended the 9th edition of the Lisbon Meetings in Game Theory and Applications . The Lisbon Meetings, hosted by  UECE at the Lisbon School of Economics and Management, are an annual event that brings together leading scholars working on theoretical or applied research in the field of game theory. The keynote speakers this year were Ehud Lehrer ( Tel-Aviv University ),  Kyle Bagwell (Stanford University), and  Herakles Polemarchakis (University of Warwick).

In addition to participants from various European countries, the meetings have also attracted many researchers from North America and Israel. Xiaozi met four game theorists from University of Vigo, including Prof. Carlos Hervés Beloso , who represents the first generation game theorist at the University of Vigo. According to him, there are about ten scientists working on the game theory at the university, representing a rich resource pool to draw expertise from the FOL’s work on trans-boundary fisheries games.

Perhaps the most relevant sessions for the FOL’s research were Environmental Economics and  Behavioral and Experimental Economics . These organized sessions were arranged by the game theory experts in the field. Take home message: (1) applying game theory to environmental and natural resources problems is a small yet growing field; (2) In terms of methodology, analytical approaches are greatly favored by the game theorists  .

Finally, a quote from the meetings: “A good model in economic [and game] theory is like a good fable (an imaginary situation that is somewhere between fantasy and reality), which is only loosely connected to reality and without much of the real-life characteristics, but something significant remains” ( by Ariel Rubinstein, originally appeared in “Dilemas of an Economic Theorist”, Econometrica, vol. 74, n.4 (2006)).